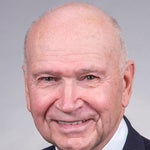 Multi-million-dollar financing, acquisitions and takeovers, international oil and gas sharing agreements – there is nothing John Fletcher cannot do. As a graduate of McMaster University and the University of Western Ontario, John has practiced top-tier law in Alberta since 1979. From his experience – spanning a 15 year Vice Presidency in Legal and Corporate Affairs with Ranger Oil Limited, to six years working with one of the biggest firms in Calgary, and his former Chairmanship at the Board of Southern Alberta Corps of Commissionaires.

John has adopted a collaborative approach to legal matters, with much of his business philosophy being based on his learning experiences in the Canadian Forces. In his own words: “Initially, I thought leaders just barked orders at people,” he says. “Later, I realized other people, even those in a subordinate position, might actually be smarter than me at many things and that by working together, we could create better results.”

As a result, John takes a collaborative approach to Calgary law, working in respectful partnership with other members of his firm to meet client needs. This approach has been extremely successful, satisfying clients, making staff retention easy and allowing him to combine two of his greatest passions, the law and helping others.

John is dedicated to a job well done and committed to his clients. He believes in and practices respect, responsibility and fairness in all aspects of his life.

To inquire about legal services, please complete our general intake form by clicking the button below:

If your inquiry is unrelated to a legal matter, please email [email protected]

MerGen Law LLP is committed to answering your questions without all the confusing legal jargon.

We'll gladly discuss your case with you at your convenience. Contact us today to schedule an appointment.